Some of our services appear not to be working at the moment.

Our team has been notified, and is working on sorting out the issue.

As you may be aware, streaming video content requires a certain level of bandwidth in order to work effectively. We're going to cover how bandwidth and resolution are handled by SimplyVideo. In using SimplyVideo, you will probably be using one of the following methods:A computer and webcam.A video conferencing or unified communications unit, such as the Poly X/Cisco Room.When it comes to video quality there are a couple of important things to consider. We'll try to demystify some of the terminologies. BandwidthBandwidth is the amount of capacity you have both inbound (download) and outbound (upload). This can be measured on sites like speedtest.net. Normally ISPs give you the headline speed, which is download only.Most credible video platforms use advanced compression and codecs to minimise the required bandwidth for highspeed HD video. However, there are limits.720p HD video calls usually use a 24-bit image colour depth that refreshes 30 times every second (30 frames per second or fps). This requires about 664Mbps of video traffic in and out (1280 x 720 x 24 x 30). This will be compressed down to between 2Mbps and 4Mbps (plus overhead) when it is transmitted over the network. The table below summarises the bandwidth requirement against various video qualities. 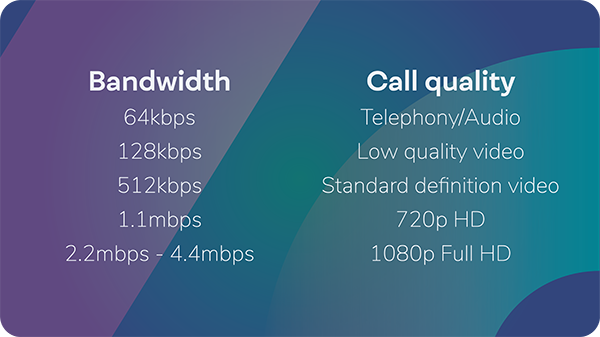 ResolutionResolution is the number of pixels in the image. The higher the resolution the better the image. On a video call, you want the image to be as sharp and vivid as possible. The more detail displayed requires more pixels. Depending on the number of people or subjects in the room, the requirements are calculated differently. Using CIF as an example.A single person in a call A full screen CIF image uses about 100,000 pixels. Usually with one person on the screen, this covers around 1/4 of the total image on screen. This gives 25,000 pixels. For a CIF call you need at least 384Kbps of bandwidth.A group in a CallThere are still about 100,000 pixels in total. The people are about 10% of the screen. This gives a total screen pixel requirement of approximately 1,000,000 pixels, so the call needs to be an HD720 call, to match an identical level to the single person. This equates to a bandwidth requirement of at least 1.1Mbps.Framerate the framerate is how quickly the image refreshes. A moving image is made up of still pictures hitting the screen to make a moving image. In a case of 30 still pictures hitting the screen every second, this becomes 30fps. 60 per second gives 60fps.In most video calls, your computer will vary the frame rate dependent on how much movement is on screen. If you are using a video conferencing codec, the same will occur, but in addition the codec will take into account the intermediate bandwidth. As an example, an empty room will not require a higher frame rate, which will reduce the bandwidth, whereas if people suddenly walk into the room and start throwing shapes, the frame rate will spike and stay high while activity is ongoing. This will result in a matching spike and sustained increase in bandwidth requirements.Dual Video or presentation channelWhen you press 'share screen' or the 'presentation' button, the system will open an additional video stream. This typically uses the H.239 data protocol (excluding MSTeams which uses different protocols). When you share a screen into a call, this becomes the main participant in single screen solution, such as webRTC, so the resolution of the participants is automatically scaled down.Concurrent Video CallsMost of us now use video in place of telephone, when calculating bandwidth, account not only for meeting rooms, but the amount of users that can be using their Laptop/Desktop at the same time, a good starting point is 25-40% of your total bandwidth.Quality of Service (QoS)Never forget QoS this is vitally important. We have a separate document for this, but 40% of your available bandwidth should be reserved and devices QoS marking appropriately. Video & SIP telephony is the most important traffic on your network.